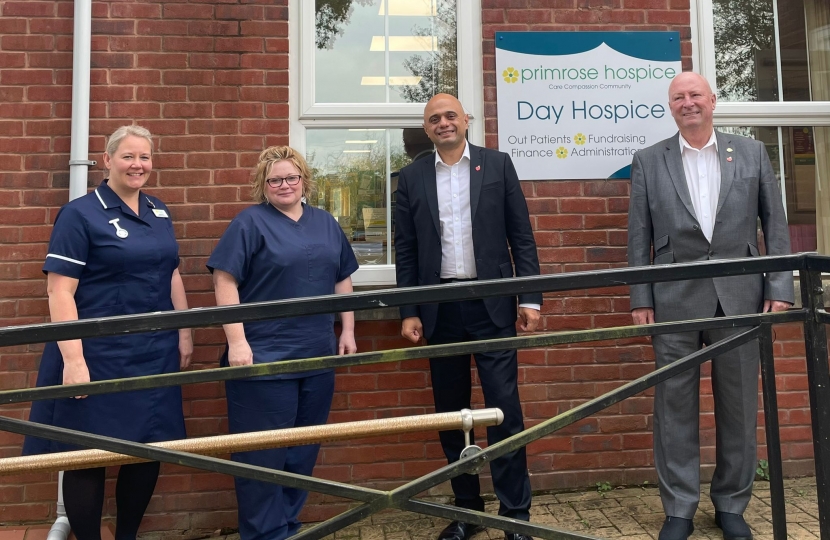 This article was written by Tristan Harris, for the Bromsgrove Standard 16/12/2021: https://bromsgrovestandard.co.uk/news/bromsgrove-mp-and-health-secretar…

BROMSGROVE MP Sajid Javid, has raised over £20,000 for the Primrose Hospice after taking part in a 10km run.

The Health Secretary is the Patron of the charity which supports people with life-limiting illnesses and families in North East Worcestershire.

Sajid was due to take place in a scheduled race on Sunday morning but due to urgent meetings on the Omicron variant, could not take part.

However, he decided to do his own run later in the day, taking multiple work-related phone calls throughout his attempt which took him 59mins and 44secs.

Despite a quicker time in his fund-raising attempt last year, he managed to raise over £7000 more his time around. The money will support the work of the Hospice to provide care and support to patients and families.

Mr Javid said: “I was determined to complete a 10km run in support of Primrose Hospice, despite a busy working weekend.

“I am delighted to have raised over £20,000 for this fantastic local charity, which supports so many local residents and their families.

“I am extremely grateful to everyone who supported me. Your generous contributions are going to a fantastic cause.”

“We’re so grateful for the incredible amount of money he has raised surpassing his target for this year.”

“It costs us £20,500 to run our Primrose Hospice and Family Support Centre for one day so this donation is essential for us to support more people living with life-limiting illnesses and families in North East Worcestershire.

“Thank you to Sajid and everyone who has donated.”