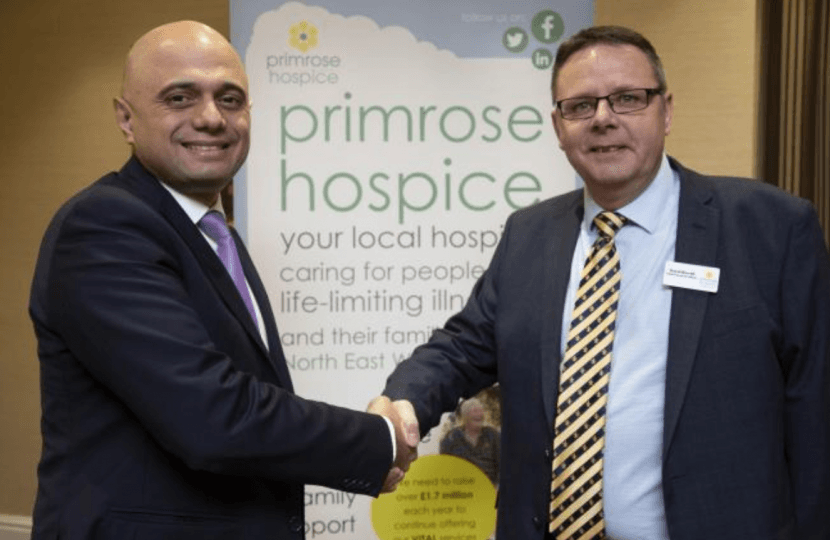 HOME Secretary and MP for Bromsgrove Sajid Javid has become patron of the Primrose Hospice.

Mr Javid made the special announcement as guest speaker at the charity’s recent networking event earlier this month.

He told an audience of people from Worcestershire’s business community how privileged he felt to accept the invitation to become the charity’s patron, from Rod Laight, Primrose’s chairman of trustees.

In his speech, Mr Javid said: “Rod approached me about becoming patron and obviously I accepted and the reason is because, it’s the same reason we’re all here today, we know just how wonderful Primrose is, the huge difference it makes, the difference you’re making now by supporting this lunch.

“And we know, sadly, the people who have benefitted from Primrose many have been in the darker moments of their life and Primrose brings in some sunlight and you’re helping to generate more sunlight today.

“So thank you very much for what you do, thank you to Primrose for inviting me to become Patron and I was obviously privileged to accept.”

“Sajid has supported this local charity for many years and this accolade is in recognition of the work he does to support Primrose.”

The Business Lunch was hosted by television and radio presenter Joanne Malin and raised more than £2,500 for the charity’s work with life-limited people and their families.

Guests at the Business Lunch enjoyed a lively question and answer session with the MP and Home Secretary in which he discussed issues affecting Bromsgrove, knife crime and Brexit.

There were also lighter moments when he revealed who he thought would win Strictly Come Dancing between himself and PM Theresa May (Mrs May), how realistic BBC’s Bodyguard was, and how he juggles family life and his role as Home Secretary.

Primrose Hospice, based in St Godwalds Road, Bromsgrove, supports life-limited people living in Redditch and Bromsgrove and their families as well as people who have experienced a sudden death in the family.

It needs to raise £1.75million annually to keep its services free of charge to patients and family members.