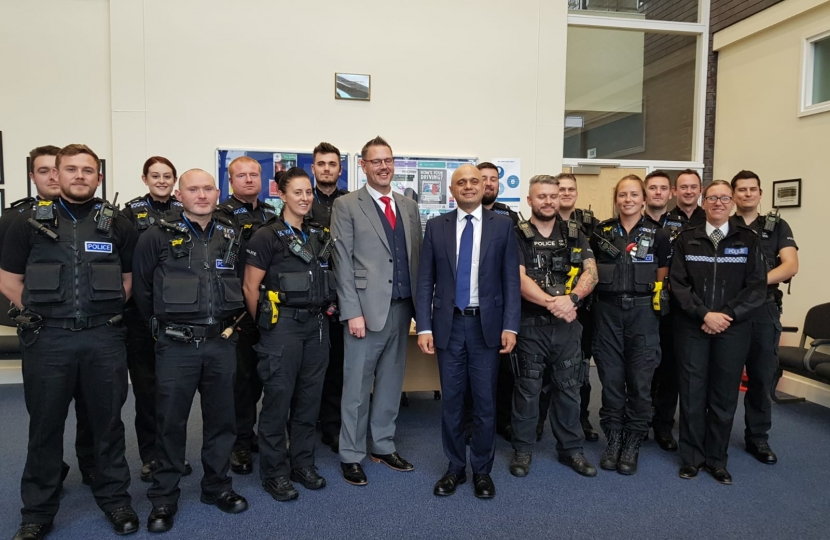 Today (11th October 2019), local MP and Chancellor of the Exchequer Sajid Javid visited Bromsgrove Police Station to celebrate this week’s announcement that West Mercia will have 93 new Police Officers patrolling the streets by the end of 2020-21.

Sajid also marked the creation of a new patrol base in Bromsgrove, and met some of the newly posted patrol officers that will be keeping the district’s streets safe from October this year.

In the Spending Review this September, Sajid announced that the government would immediately provide £750m to start putting more officers on the streets of England and Wales. This funding will ensure that new officers are fully trained, kitted out and ready to hit the streets by the end of 2020-2021.

West Mercia Police have been set a first year recruitment target of 93 new officers, with more to follow in subsequent years. Warwickshire are set to receive 41 police officers, Staffordshire 90 and Gloucestershire 46.

John Apter, National Chair of the Police Federation of England and Wales described the recruitment targets as a “positive start” and a “boost to my members and the communities they serve”.

The recruitment campaign website ‘Be a Force for All’ has been visited more than 215,000 times since the government announced its investment.

Commenting on the announcement, Sajid said:

“Cracking down on crime is a local and national priority for me. I’m delighted that West Mercia is set to recruit nearly 100 more police officers in the first year of our recruitment drive.

“That means more dedicated local officers on the beat in our community: tackling crime, protecting the public and sending a clear message to criminals - that they should feel fear at the very thought of committing an offence.

“Bromsgrove Police station and its hard-working officers are a credit to the Police Force.

The additional 25 officers on patrol in Bromsgrove; and the 93 set to be recruited across West Mercia, will help our fantastic police force get even tougher on crime, giving residents greater peace of mind.

“We have been clear from day one that this government will give the police the resources they need – and I am determined to deliver on that commitment.”