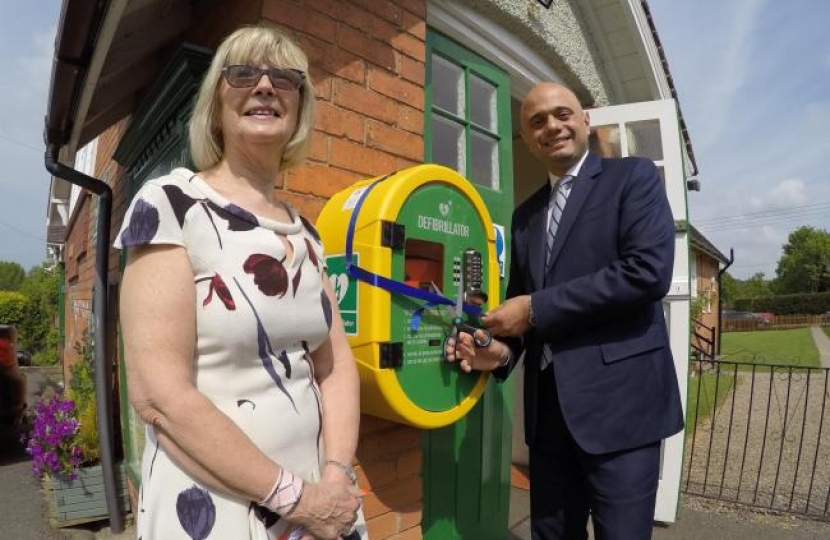 A TOP of the range defibrillator has been officially opened at a Bromsgrove village hall by MP Sajid Javid.

Mr Javid was shown how to use the life-saving equipment by Rob Underwood, of the Charlotte and Craig Saving Hearts Foundation, at a ribbon-cutting ceremony at Finstall Village Hall on Friday, May 18.

Chairman of the Alcester Road hall's management committee Rosemarie Ryan said: "We decided to make getting a defibrillator installed at the village hall the focus of our fundraising coffee meetings.

"Normally we donate half of the money towards the upkeep of the village hall and the other half to a chosen charity.

"The unit costs £2,000 so it would have taken us forever to save up the money on our own.

"Residents made donations and HSBC agreed to donate £700 towards the unit, which was installed around 12 months ago."

Speaking at the ceremony, Mr Javid said: "Having this defibrillator is so important in any community.

"It's great to come to Finstall and see so many people coming together to ensure the village gets their own unit."

Neil Beetlestone, head of central region at HSBC, added: "We have a team that welcomes anyone in the local community to suggest ways in which HSBC can support them. That's how we found out about the need for a defibrillator in Finstall.

"These units are so important to communities.

"We've heard examples from our other branches where the community has been in need of a defib and there hasn't been one there, so we were keen to invest in this and have a chance to literally be at the heart of the Finstall community."