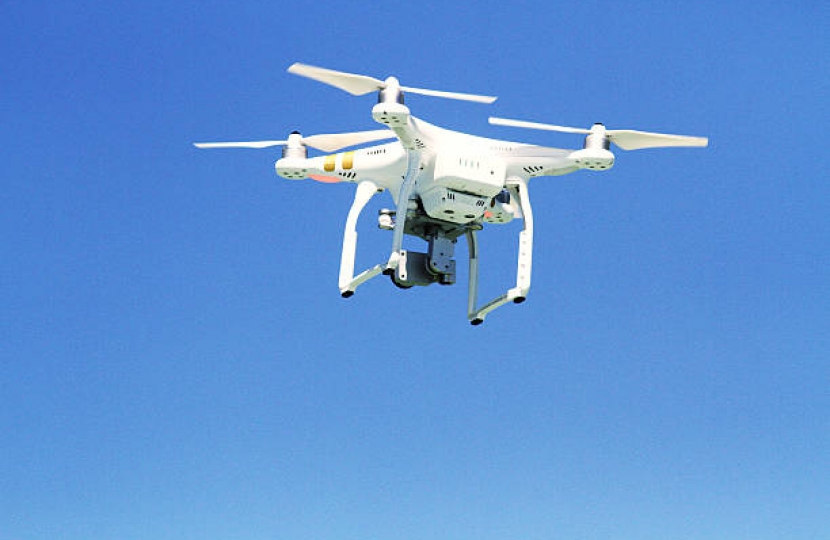 The government and the Civil Aviation Authority (CAA) have today (20 February 2019) announced a new partnership with the retailer Jessops, as part of a national campaign to increase public awareness of the rules around flying drones. Working with the CAA, the government is dialling up a campaign to help educate the public about responsible drone use, including issuing a digital toolkit to airports to help them raise awareness of the new rules.

Following on from new laws last year restricting the use of drones and bringing forward a new drone-users register, today, the government also announced new legislation to extend the ‘no-fly’ zone around airports, banning drones from flying within 5km of runways.

The new exclusion zone will be increased by several kilometres, including banning drone flight within 5km of runway ends. The enlarged zone will better protect the UK’s airports from those misusing drones, and will come into force on 13 March 2019.

Work to progress a new Drones Bill is also underway and will be introduced in due course. It will give police officers powers to stop and search people suspected of using drones maliciously above 400ft or within 5km of an airport — helping them to tackle disruption such as that seen at Gatwick in December. It will also give additional new powers to the police to clamp down on those misusing drones and other small unmanned aircraft — including the power to access electronic data stored on a drone with a warrant.

The law is clear that flying a drone near an airport is a serious criminal act. We’re now going even further and extending the no-fly zone to help keep our airports secure and our skies safe.

We are also working to raise awareness of the rules in place. Anyone flying their drone within the vicinity of an airport should know they are not only acting irresponsibly, but criminally, and could face imprisonment.

Extending stop and search to include drones will help police tackle disruption like the recent misery we saw at UK airports, when travel was ruined for thousands of innocent passengers, and bring those responsible to justice.

Police are clear that stop and search is one of the most powerful tools they have to target and disrupt crime and I remain committed to giving them all the support they need to protect the public.

Drones are one of the most exciting ways of capturing stunning aerial photos and videos, and with prices more affordable than ever they are within reach of any budding photographer and videographer. Many are intuitive and simple to operate, making them ideal for beginners, while the more sophisticated models now offer features such as full manual control of the camera and stunning 4K 60fps video, that help advanced photographers take their shots to the next level.

Along with the pleasure drones bring comes a responsibility for the user to ensure they are flying their drone safely and legally. As one of the leading drone retailers Jessops is committed to ensuring it communicates the new laws to all its customers, and it will be doing this through extensive training from our dedicated drone specialists Connor Keenan and Jon Dick.

It is illegal to fly drones close to airports and anyone flouting the rules can face severe penalties including imprisonment. Anyone operating a drone must do so responsibly and observe all relevant rules and regulations. The rules for flying drones are designed to keep all airspace users safe.

The CAA’s Dronecode provides advice on how to fly your drone safely and follow the rules. you can see it at www.dronesafe.uk

The Home Office is also reviewing the UK’s approach to countering the malicious use of drones, and will consider how best to protect the full range of the UK’s critical national infrastructure — including testing and evaluating technology to counter drones.

The Home Office will also extend stop and search to people suspected of carrying corrosives substances in a public place, which will help prevent acid attacks. Currently, they must be suspected of intent to cause injury.