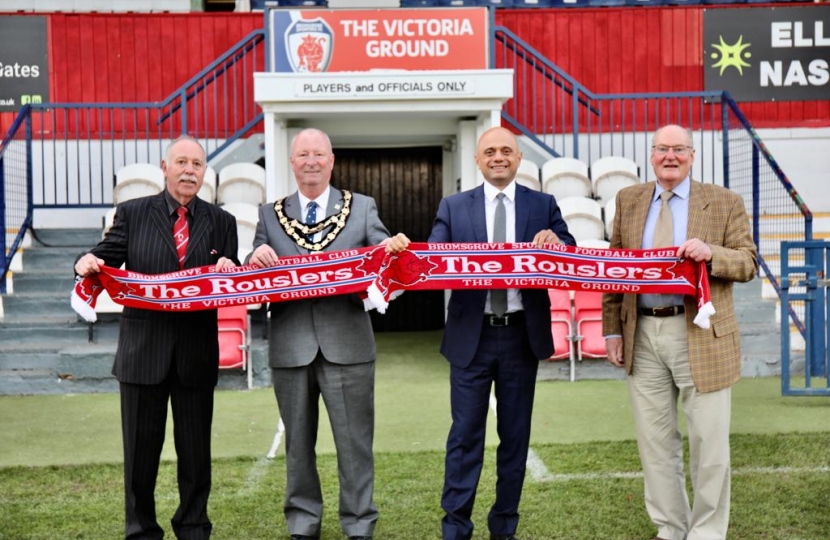 This article was written by Tristan Harris, for the Bromsgrove Standard, 16/10/2021: https://bromsgrovestandard.co.uk/news/mp-drops-in-on-bromsgrove-sportin…

TOWN MP Sajid Javid dropped in on Bromsgrove Sporting to wish them luck ahead of their ‘biggest game in it the club’s history’ this afternoon.

Mr Javid is backing The Rouslers as they go head-to-head with National League leaders, Grimsby Town in the fourth qualifying round of the FA Cup.

And he echoed manager Brendan Kelly’s comments, urging fans and residents to get behind the team.

Sporting edged out Welwyn Garden City 1-0 in the previous round to book a date with Grimsby – who were only relegated from the Football League last season.

After his visit to the Victoria Ground, Mr Javid said: “I’m urging everyone in Bromsgrove to get behind the club for this important fixture today.

“It’s going to be a brilliant occasion for the team and the entire town.

“Sporting have had a brilliant run in the FA Cup this year and I can certainly feel the excitement building ahead of kick off.

“There’s nothing like the magic of the FA Cup and I wish the best of luck to everyone at the club for the match.”

The Rouslers’ clash with Grimsby is live on the BBC Red Button, Sport website and app, and iPlayer for those supporters who were unable to get a ticket.

Last week, the Chancellor of the Exchequer delivered his Autumn Budget, setting out how the Government will deliver a stronger economy for the British people as we build back better from the pandemic.