My Personal Statement in the House of Commons 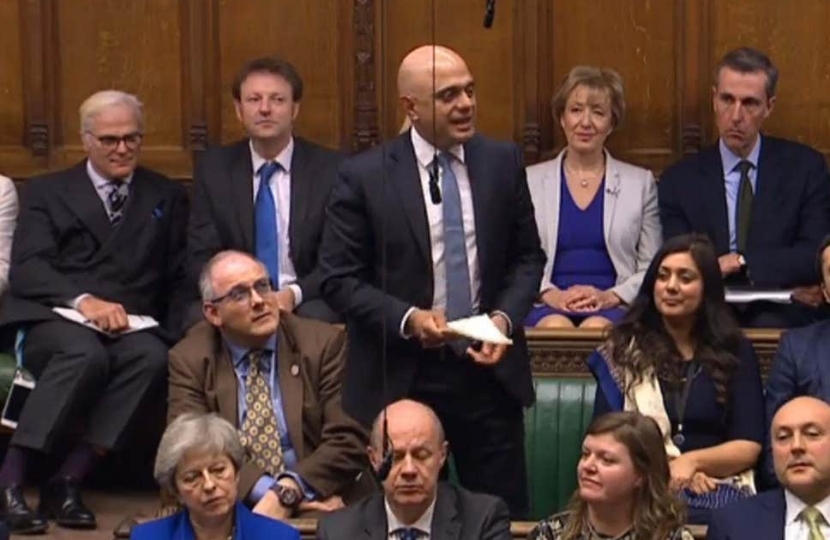 It has been eight years since I last stood to speak as a Back Bencher, and it is a privilege to do so again. When I left these Benches, it was to become a Minister in the Treasury, and it seems apt that I went back to whence I came: the circle of life.

I am very proud to represent the good people of Bromsgrove, and I will of course continue to do so. I will also continue to champion the causes that I believe in most, albeit from outside the Government.

I confess that I had hoped to have a little longer to make a difference from the inside, so—with thanks for your permission to make this statement, Mr Speaker—I thought it would be appropriate to briefly explain, first to the House, why I felt that I had to resign as Chancellor of the Exchequer.

I would also like to take this opportunity to thank all colleagues in this Chamber and beyond for their messages of thanks in the last two weeks, and to thank my family for their love and patience over the last few years.

I came into politics to give something back to the country that has given me so much. While I do not intend this to be my last chapter in public life, whichever form that may take, I am immensely grateful for the trust and the support of colleagues in all the roles that I have had.

After first holding two ministerial positions within the Treasury, and then returning as Chancellor, I have had the huge privilege of running four Departments. Each taught me more than the last, and it shaped my understanding of government. I can look back and say to myself, very sincerely, that I have never once made a decision—or, indeed, given advice on a decision—that I did not believe was in the national interest.

You see, Britain’s democracy and economy are strong because of its institutions and its people. Conservatives especially believe that no particular person, or even a Government, has a monopoly on the best ideas. It is through these checks and balances of credible institutions—be it the Treasury, the Bank of England, the Office for Budget Responsibility, or, indeed, this House—that we arrive at sensible decisions that are in the national interest.

Now, when reflecting on the dynamic between No. 10 and No. 11, it is natural to look at past relationships. There is no one size that fits. Any model that works, or does not, depends on the personalities that are involved just as much as the processes. It depends on the mutual respect and trust that allows for constructive, creative tension between teams.

It is that creative dynamic that means that it has always been the case that advisers advise, Ministers decide, and Ministers decide on their advisers. I could not see why the Treasury, with the vital role that it plays, should be the exception to that.

A Chancellor, like all Cabinet Ministers, has to be able to give candid advice to a Prime Minister so that he is speaking truth to power. I believe that the arrangement proposed would significantly inhibit that, and it would not have been in the national interest.

So while I was grateful for the continued trust of the Prime Minister in ​wanting to reappoint me, I am afraid that these were conditions that I could not accept in good conscience. I do not intend to dwell further on all the details and personalities—[Interruption]—the Cummings and goings, if you will. [Laughter.]

Much of this commentary was just gossip and distraction, and now it is in the past.

I very much hope that the new Chancellor will be given the space to do his job without fear or favour. I know this: that my right hon. Friend the Member for Richmond (Yorks) (Rishi Sunak) is more than capable of rising to the challenge. He worked for me as a Local Government Minister and as Chief Secretary, and I could not have asked for a better working relationship.

Indeed, I had lobbied the PM for him to be given the role as Chief Secretary, and to keep it at the recent reshuffle—but I did not get my way on that one!

My right hon. Friend the Prime Minister has won a huge mandate to transform our country, and already he is off to a great start: ending the parliamentary paralysis, defeating the radical left, getting Brexit done, a points-based immigration system, and an infrastructure revolution.

Now our party—our Government—has a huge opportunity and responsibility ahead. We need a resolute focus on long-term outcomes and delivery, not short-term headlines. The Treasury as an institution—as an economic Ministry—should be the engine that drives this new agenda.

Since last summer, it has done just that, from planning properly for Brexit, to bringing in a generational step-change in infrastructure investment; from rewriting the Green Book to better favour our regions, to long-term thinking on human capital and designing the blueprint for levelling up across our country. I am incredibly proud of the scale and speed of the work that has already been done.

But the Treasury must also be allowed to play its role as a finance Ministry, with the strength and credibility that it requires. I am a proud, low-tax Conservative, and I always will be. Already, our tax burden is the highest it has been in 50 years. It is fair to say that not everyone at the centre of Government always feels the pressure to balance the books—it was ever thus.

But the Treasury has a job to do. It is the only tax-cutting Ministry. Every other Department has an in-built incentive to seek and spend ever more money—not that I did that when I ran Departments, of course. I see that my right hon. Friend the Member for Maidenhead (Mrs May) is agreeing with that. But trade-offs have to be made somewhere.

At a time when we need to do much more to level up across generations, it would not be right to pass the bill for our day-to-day consumption to our children and grandchildren. Unlike the US, we do not have the fiscal flexibility that comes with a reserve currency. That is why the fiscal rules that we are elected on are critical.

To govern is to choose, and these rules crystallise the choices that are required to keep spending under control, to keep taxes low, to root out waste and to pass the litmus test that was rightly set in stone in our manifesto of debt being lower at the end of the Parliament.

While I am of course disappointed not to be finishing what I started, I look to the future not with apprehension but with great optimism.

We on the Government Benches have a shot at achieving nothing less than wholesale renewal for our economy, our society and our country—a chance to give everyone an opportunity to live up to their full potential, wherever they live and whatever their background; to put people, place and social justice at the heart of a more human capitalism; and to bring ​our country together as one nation.

I know that this is a shared vision, and I firmly believe that my right hon. Friend the Prime Minister has the tenacity, the energy and the skill to see it through.

I want to leave the House in no doubt that he has my full confidence, and the Government my full support, to get it done.