'Nature's value is as important as GDP': Javid looks to balance the books on biodiversity 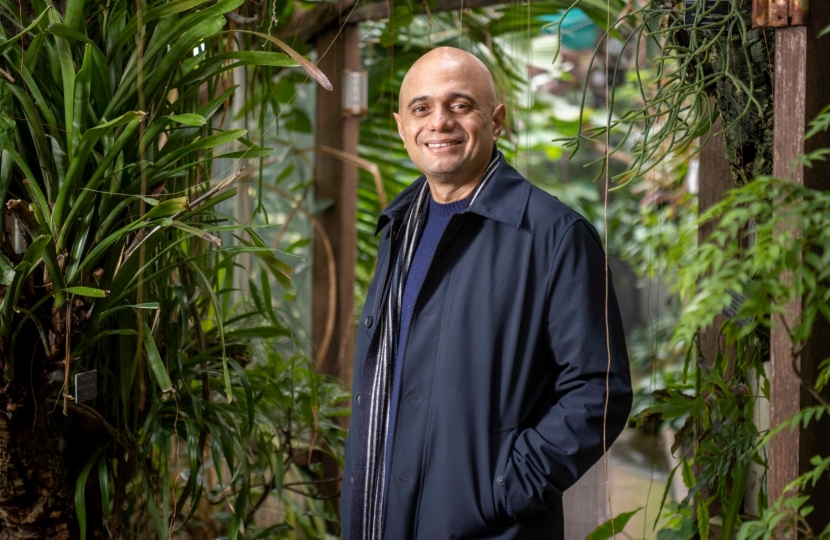 Sajid Javid at the Chelsea Physic Garden credit: Paul Grover for The Telegraph.

This interview was originally published in The Sunday Telegraph, 14/02/2021, by Helena Horton.

Countries' wealth can no longer be calculated on GDP and financial assets alone and must be overhauled to include the value of their nature as well, the former Chancellor says today.

Sajid Javid has called for a new international financial organisation to price up biodiversity and carbon, in a major overhaul that would put a "cost to nature of the resources we use".

In an exclusive interview for the Sunday Telegraph the MP for Bromsgrove gave his views on veganism, working with Donald Trump and how the world’s financial institutions need to radically change to solve the climate and biodiversity crises.

There have recently been perceived tensions in the Conservative party between the “Green” wing, on which include the Prime Minister, his fiancée Carrie Symonds and ministers including Michael Gove and Lord Goldsmith — and backbenchers who believe their core voters will balk at the idea of radical environmental measures.

However, Mr Javid said taking care of the environment is a conservative value and the free market is key to solving environmental challenges.

He explained: “I think that [pricing nature] fits perfectly well with being a free marketeer, because if you price things properly, and you account for things properly, including the demands of nature, then I think that the pricing mechanisms themselves will help try and bring about the kind of change we want to see”.

The former chancellor said countries need to focus less on GDP and look at their true wealth, including natural capital.

“We haven't really as a society priced the cost to nature of the resources we use,” he explained.

“We tend to as societies focus very much on GDP, which is the sort of flow of income, let's say in your country from one year to the next, rather than the total wealth that we have.”

The idea of pricing nature was recommended by the recent Dasgupta review, the first of its kind, released by the Treasury last week. Mr Javid commissioned the report, and is hoping the world takes notice and changes the way it does business.

A new international financial organisation needs to be set up in order to make this happen, he said.

“We need perhaps a new organisation to help do this - not only how to protect ecosystems but if we are better to take account of the impact on nature. International accounts do not take into account at all the value of the natural environment and if there were more of an international drive to force companies to think about these costs then that could make a huge difference to the natural environment,” Mr Javid explained.

The former Chancellor, in his pre-politics role in the City of London, did not always pay attention to nature. This is why he feels so passionately about changing the way the international economy works, he said, because once nature is a number that can be looked at by banks, it can be priced into financial decisions that would otherwise harm the environment.

Mr Javid explained: “I have gone on a bit of a journey myself. I think about when I was at university studying economics and issues like GDP, growth, how to boost the economy, I wasn’t thinking about the impact on the planet.

“In protecting biodiversity - if I can make an analogy - before I came into politics I worked in the City, in finance, I gave people financial advice. As a financial adviser you tell people to diversify your assets, reduce risk. And the same is true for biodiversity - we need diversity in nature, it’s a good thing, we are all asset managers of nature, we all want to play our role.”

Mr Javid has also been taking steps in his personal life to reduce his carbon footprint. He told the Sunday Telegraph that now he is a backbencher, he cycles far more, and is cutting down on the meat he eats.

Countries across the world are this year meeting together to take steps to stop the climate and biodiversity crisis, most notably at the COP 26 climate conference in Glasgow this summer. One former leader Mr Javid seems to be pleased is off the world stage is Donald Trump.

He said: “I remember when we were planning for COP 26 in its original date which would have been November last year, Trump wasn’t even going to turn up. He didn’t give a damn about nature or the impact of climate change, he didn’t care, all his policies were designed to make the situation even more damaging than it is.

“President Biden is going to be a complete change - I’ve been speaking to people in the Biden administration and was chatting recently with John Podesta who was the Chief of Staff to Obama and people have assured me that for Biden this is one of his most important issues.”

Sajid Javid MPs contribution to the Budget Debate, as delivered on 3rd March 2021.

Over the course of the past year,

in countries not too dissimilar to our own,