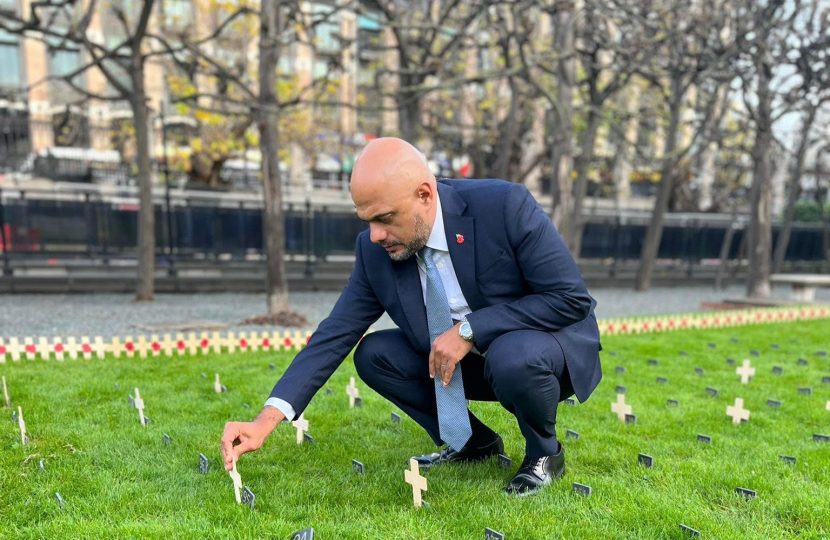 This article was originally published in the Bromsgrove Advertiser, by Lucy-Ann Jones, 10/11/2022: https://www.bromsgroveadvertiser.co.uk/news/23116930.sajid-javid-dedica…

SAJID Javid has dedicated a memorial stake at a garden of remembrance in Parliament to the Bromsgrove Royal British Legion (BRBL).

The Bromsgrove MP has planted the memorial at The Constituency Garden of Remembrance based in New Palace Yard which was launched last year.

MPs were invited to plant a stake on behalf of their constituents and in memory of those who have served the country.

Mr Javid decided to dedicate his stake to the BRBL and Sergeant Major Patrick Smith who served in the armed forces for 22 years before volunteering at the BRBL for many years.

Sgt Major Smith was also the chairman of the BRBL for 15 years but announced his retirement from the legion earlier this year.

Sajid Javid said: “Every year, we come together to remember those who made the ultimate sacrifice to protect our freedoms, and for the past two years I have been honoured to plant a memorial stake on behalf of Bromsgrove District in The Constituency Garden of Remembrance.

“This year, I was pleased to also dedicate the tribute to the Bromsgrove Royal British Legion, and Sergeant Patrick Smith.

“I would like to thank the Bromsgrove Royal British Legion, it’s members, and Sergeant Smith for their service.”

The BRBL have organised a parade on Sunday, November 13 which will start from outside Argos at 10.15 am and reach the memorial, on Crown Close, at 10.30 am.

The service will be conducted by Rev Ray Khan by the memorial unless wet weather forces the event inside at St John’s Church.

Cllr Rod Laight will be laying a wreath at the town’s memorial while at noon Cllr Karen May and the deputy lieutenant of Worcestershire will be laying wreaths inside St Johns Church.

Chairman Cllr Laight said: “We will never forget the bravery of those who have and who continue to serve our country and laying wreaths and taking time to reflect on this demonstrates our pride and respect.

“I am delighted that my colleagues will be representing the council at the events across the District and I look forward to seeing residents there too.”