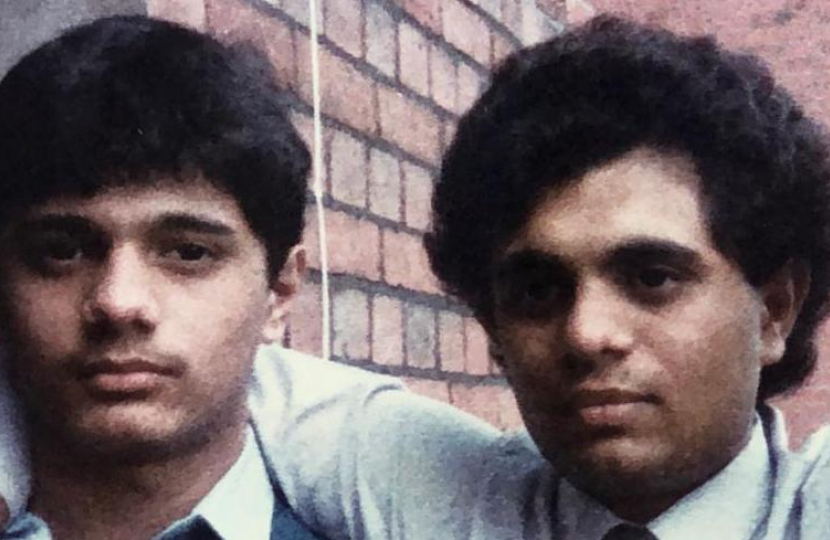 Sajid Javid had been to visit his mother, Zubaida, in Bristol, and was about to arrive home in London when he got the phone call from his younger brother.

He was told that their older brother, Tariq, had checked into a five-star hotel in Horsham, West Sussex, just a few miles from his home, with the intention of taking his own life.

Tariq had left two suicide notes, including one that told Sylvia, his partner of 15 years, that she should “carry on and enjoy life”.

For an hour, Javid, 52, who was home secretary at the time, did not know if his brother had taken his own life or was still alive but urgently needed help.

“He told his partner to go to the hotel that he checked into but said that he would no longer be able to talk to her. The letters were almost technical and not at all emotional and told her exactly what she should do with his belongings,” he said. There had been no indication to him, or to the rest of the family, of his brother’s state of mind.

Sylvia and a cousin, who lived locally, went to the hotel. Tariq, the 51-year-old manager of a supermarket chain, was found dead in his hotel room lying face down in the shower, and was more than five times over the drink-drive limit.

Javid, now the health secretary, said: “It was a big shock because for me, for my brothers and the rest of the family there just weren’t any signs.”

Speaking for the first time about his brother’s death in July 2018 as he visited the London headquarters of Papyrus, the suicide prevention charity, on Friday, Javid said he suffered from survivor’s guilt.

He said: “We were all very close growing up — all five brothers born within seven years of each other — so you think about what we could have done? There were no signs and we learned later that Tariq had had some concerns about his work.

“We learned afterwards that he had a physical health problem that he hadn’t told anyone about . . . and if we had just known, if he had talked to us, perhaps we could have done something.

“So you think about that. Maybe I could have made a difference. And I guess I will never know the answer to that.”

Javid, whose parents immigrated to Britain from Pakistan in the 1960s, believes the stigma about mental health may have prevented his brother from seeking help.

He said: “I think in some cultures — and I would say this is true of the Pakistani culture — there is a stigma around talking about mental health issues. And we have to get the message out that it doesn’t matter what culture we come from — we are all human beings and all of us at some time of our lives can have a mental health challenge and there is nothing wrong with that.

“The most important thing is to tell someone, to speak to others and where appropriate to seek help.”

According to the coroner’s inquest in October 2018, Tariq had previously suffered from back and leg pain, for which he took codeine, but the inquest heard he had been “relatively pain-free” for a year. In June, a month before his death, the inquest heard that he had been signed off from work due to stress and anxiety. He was also suffering from stomach problems that were said to be “under investigation” by hospital doctors.

A post-mortem examination gave the cause of death as drowning, ethanol toxicity, heart disease and codeine toxicity. Reflecting on his brother’s death, Javid said: “I was very busy at the time. I was home secretary and there was a lot going on but I do think about what more I could have done to make more time for my brother and talk to him in the way that we used to talk when we were children.”

He added: “As children and young adults we talked about everything — good things and bad things — girlfriends, doing badly at exams and who was going to tell Dad.

“We were close brothers but as you grow older and you move away from home it becomes harder and certainly one of the lessons I have learned is to make time for your loved ones.”

Javid said that their loss has brought him, his mum and his remaining brothers — Basit, 51, a deputy assistant commissioner for the Metropolitan Police; Atif, 47, a property investor and developer; and Khalid, 53, who works in the financial services industry — closer together.

Their father Abdul Ghani-Javid, a bus driver who arrived in Britain in 1961 with £1 in his pocket, died of cancer in 2012.

“It was his [Tariq’s] birthday last week,” Javid said. “He was the very first thing I thought of when I woke up and my last thought at night. On that day, I couldn’t call my brother, so I called my mum. I just wanted to connect with her and when she picked up the phone the very first thing she said is that it would have been Tariq’s birthday today and she was thinking the exact same thing as me.

“And we talked and she cried a bit but it was important to do that. As we were speaking in the brothers’ WhatsApp group, one of my brothers then posted a message with a photo of Tariq as a child with a message underneath it saying ‘Happy Birthday Bruv’.”

Javid said he has now changed the way he interacts with his friends and children. “I make sure I make time for people and ask them how they are feeling,” he said. “During the pandemic a close family friend was suffering with severe mental health problems and I was worried.

“Although he didn’t use the word suicidal, I was worried about the signs I was seeing and I absolutely insisted that he got mental health support. At first he was very reluctant but eventually he did and now he is in a much better place and I am not sure I would have done that before this tragedy happened to my family.”

He added: “I am blessed with four wonderful children — three who are young adults now — and I talk to them much more now about their feelings. Of course there are mental health professionals, but there is a role for all of us in this. If there is anyone thinking about what they can do to help, the number one thing is to talk to your loved ones and your friends and ask them how they are feeling.

“But don’t just ask them the question in a way that they will nod along to — ask them how they are really feeling and take your time.”

Suicide is the biggest cause of death in men under 50 and about three-quarters of deaths by suicide every year are men. In 2021 there were more than 5,000 suicides registered in England. The highest rates of suicide in men have been in mixed and white ethnic groups, according to the Office for National Statistics. The Samaritans answer a call for help every ten seconds.

It has also pledged to ensure that by 2023-24 anyone in the country can dial NHS 111 to contact a local mental health team for around-the-clock support.

“This has been a very personal experience for me but it’s by no means unique,” Javid said. “Sadly many thousands of people take their own lives each year and the numbers are going up.

“Obviously I want to find out what more we can do to prevent that and when it does happen to support people who are left behind. I feel that I am in a privileged position to do more about this because of my own experience and because I am the secretary of state for health.”