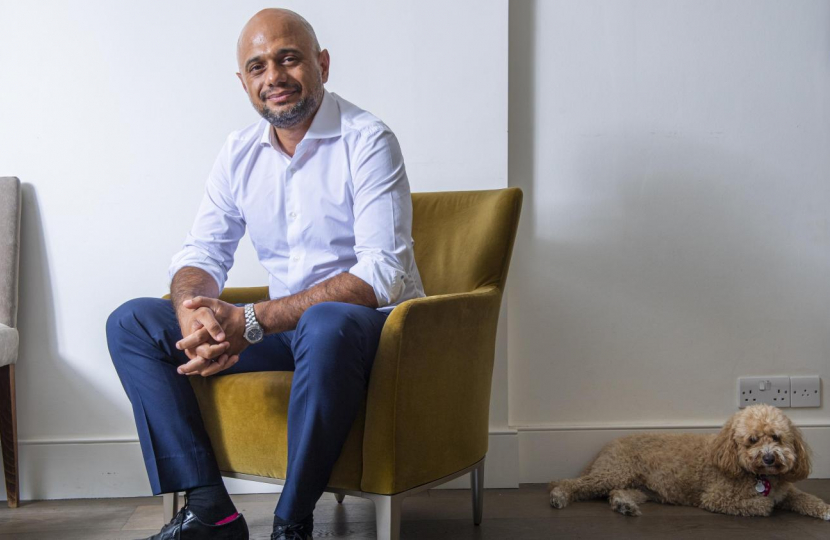 Sajid Javid and Bailey, his barking cavapoo, greet me at his terraced Fulham home, the former dressed in trousers and a white shirt, and sporting a brand-new beard and moustache, which he’s eager to discuss.

“I’ve liked the look of beards for quite a while but each time my wife’s talked me out of it,” says the former home secretary and chancellor, who resigned as health secretary last month. “This time I thought ‘Let’s see if I can convince her.’ I’ve got more time on my hands at the moment, growing a beard is how I can spend it.

“She fully expected me to shave it off but today I was doing the rounds [of television and radio interviews] — she’s away, but she saw me. She texted, ‘What are you doing?’ I said, ‘Let’s get some different opinions, see what the public response is.’”

Clearly, this issue is foremost in Javid’s mind. After we meet he starts a Twitter poll asking if it should stay or go (about 60 per cent favour the former). “I can’t say if it’s permanent or not, but everyone wants to ask me about it above everything else, it’s a great distraction tactic,” he chortles.

Hirsuteness apart, most are also keen to know why Javid, 52, a vocal backer of Liz Truss in the Tory leadership race, is robustly defending her promises to cut taxes, despite many economists — and her rival, Javid’s former protégé Rishi Sunak — warning that this would exacerbate inflation, which has hit a 40-year high, it was announced this week.

Javid acknowledges that current predicted inflation rates of 13 per cent are “very scary.” But, he insists, “no major economy in the world is not facing an inflation crisis”.

“People rightly say to me, especially economists, ‘Isn’t cutting tax risky at a time like this?’” he continues, the tone now distinctly focused. “Any major economic decision comes with risk. But it’s a lot riskier not cutting taxes.”

In a recent article for this paper, the former Remainer-turned-enthusiastic-Brexiteer argued that Sunak’s refusal to take that risk meant the UK was “sleepwalking into a big-state, high-tax, low-growth, social democratic model which risks us becoming a middle-income economy by the 2030s.”

Sunak, meanwhile, insists that tax cuts will do nothing to help the most vulnerable, who pay little or no tax. This, along with Truss’s refusal to freeze energy bills, have led the former chancellor to assert that Truss’s perceived indecision of a plan to tackle the cost of living crisis amounts to a “moral failure.”

Lower taxes, Javid counters, are vital to “getting the growth rate up to properly pay and sustain for public services”.

He adds: “Our taxes are the highest in almost 70 years. Prior to the financial crisis, our average growth rate was around 2.7 per cent, but in the last decade, it’s been around 1.7 per cent. Some would say ‘You can’t cut taxes until you get the growth.’ I think that’s the wrong way around. You need to cut taxes to kickstart the growth.”

In any case, he continues, Truss’s cuts may not be as drastic as anticipated. Her pledge to halt a planned rise in corporation tax “is not inflationary because she’s talking about not doing something.” She also wants to reverse Sunak’s national insurance hike, which Javid praised in April as “right” and “fair.”

Now he thinks it should go: “For an average worker it’s about a £240 saving a year. That numbers £15 billion, when you’ve got a £2 trillion-plus economy, there is not a single economist going to tell you that’s going to have any meaningful impact on inflation. It’s [only] helpful to that family.”

Not very helpful, however, if average households are facing energy bills of £4,650. “It’s about showing a change in direction,” he counters.

Truss has also had a change of heart on initial threats to cut public sector pay, but Javid is clear that some belt-tightening is inevitable.

“I’ve just come from a [health] job that has the largest number of public sector employees, they work incredibly hard. So it’s not easy, but it’s important to show public sector pay restraint.

“The government’s rightly accepted the 4.5 per cent on average that was suggested by the independent pay body for the NHS, but with nurses demanding 13 per cent you can see why there’s a gap.

“But one of the worst things we’ve learned from history is if you’re not robust with pay restraint you could hardwire the economy and create an inflationary spiral that makes everyone worse off for much longer.”

He’s gnomic about whether Truss will or won’t offer handouts to help people through winter.

“[Truss] has recognised that more may well need to be done, but you can’t be specific about that right now.”

Why not? “Because Liz hasn’t had the same benefit as Rishi. If you’ve been the chancellor for the last few years, you’re probably a bit more familiar with the numbers than anyone else. [But] even if you had some of the historic [knowledge], things are moving at such a fast pace when it comes to the economy the right call is to say, ‘If I win I know I’ve got to do something more than taxes. But I will look at those options and what can we afford at the time.’ If she becomes prime minister she’s made it clear an absolute priority is an emergency budget in the first few weeks.”

The twitterati cast aspersions on Javid when he sided with Truss over Sunak, branding him a “snake”, a “backstabber” and a “chameleon”. The two men share a passion for Star Wars, with Sunak once calling Javid a “Jedi Master”, while Javid tweeted that “The Force is strong in young Sunak” in return when Sunak took over from him as chancellor.

Many assumed that the pair had organised a co-ordinated attack on Boris Johnson when both resigned from government within ten minutes of each other. The joint departures triggered mass resignations among junior ministers, eventually resulting in the prime minister standing down.

“I had zero idea Rishi was planning to resign, I was as surprised as anyone. If we had had a plan I don’t think it would have been ‘You co-ordinate with me, then you back my opponent.’”

Insiders have suggested that Javid’s desertion resulted from Sunak’s refusal to accede to Javid’s demands more funding for Covid testing while he was health secretary.

He insists, however, that there are no hard feelings between the two.

“Both candidates are good friends, two very talented, very sensible, credible people. They’re both professionals and understand these decisions aren’t personal. You have to make the decision genuinely on the basis of who you think has got the better plan and is therefore also most likely to win the next election.”

Like Sunak, Javid is the son of immigrants. His father arrived in the UK from Pakistan with £1 in his pocket, before working variously as a bus driver, factory worker and shop owner. Both Sunak and Javid are former high-flying bankers, while both have been in the spotlight for their non-dom tax statuses, which allow for the legal avoidance of payments on overseas earnings. In Sunak’s case, the issue concerned his wife’s status, while Javid’s revolved around his seven-figure salary at Deutsche Bank. Javid’s said he voluntarily gave up the status up before entering politics.

His home is template metropolitan elite (a neighbour’s house has just been sold for £3.15 million), and boasts a tasteful, modern kitchen that backs on to a paved garden, with steps leading to a palatial basement, complete with a Peloton exercise bike.

His sideboard is decorated with cards offering congratulations on his recent silver wedding anniversary. He and his wife, Laura, celebrated with a party in his Bromsgrove constituency, where his four children, aged between 14 and 23, made an impromptu speech. “There were lots of jokes about my resignations and about being culture secretary. They think every job I’ve had since then has been a demotion.”

Javid was a student Conservative while studying at Exeter University. His walls were decorated with pin-ups of Margaret Thatcher and Ronald Reagan. Truss, he says, “combines the best instincts of both.”

“Margaret Thatcher was someone who got things done. She knew to get the right thing you need to shake up the status-quo and pursue it.”

What’s an example of something Truss has got done?

Javid looks surprised, then picks something she hasn’t done yet. “Some would claim cutting tax is not the prudent way to go, but she’s rightly stuck to her plan.”

He speaks fondly of Reagan: “What I always admired about him was that sunny optimism . . . it was based on the understanding that if you get the big calls right, things will get better. We’re facing lots of challenges, but Liz is rightly optimistic about what can be achieved. That’s important in a leader.”

Johnson was an optimist too, but in the end that wasn’t enough to maintain Javid’s fidelity. “It was a balance between loyalty and integrity. It’s not easy to resign. I’d given [Johnson] benefit of doubt in the run-up to that, but — call it old-fashioned — if you lose confidence in your boss you have to go.”

Javid has previous resignation experience. In 2020, on the eve of the pandemic, he quit as chancellor after Johnson asked him to sack all his advisers. “Both times afterwards, I had a Five Guys cheeseburger delivered here, with all the toppings except bacon,” he says, the perkiest he’s been throughout the conversation at the memory.

With Truss so far ahead in the polls, he must be gunning for a plum job in her cabinet. How about health secretary again, I ask, — the job he says he was proudest of. “No, no, no!” OK, how about foreign secretary, the only great office (bar prime minister) that he’s never occupied?

“I don’t think talking about jobs is the right thing to do. If Liz wins and will assemble a team, it’s a decision for her. I’ve already been given a real opportunity to serve. I’d be perfectly content on the back benches.”

He gestures to his chin. “A greybeard on the back benches.”

It is a pleasure to follow the hon. Member for Wallasey (Dame Angela Eagle). I am filled with great sadness as I rise to pay tribute to the life and memory of Her late Majesty Queen Elizabeth II.